skip to main | skip to sidebar

This is my Homecomming group.
Left to right
Me, Chase, Jeanann, Dakota, Ashley, Peanut(His name is really Peioneti but we just call him Peanut.) 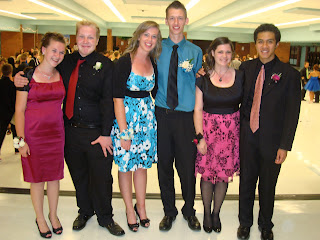 This is one of my friends named Ali. We were standing in line for pictures. 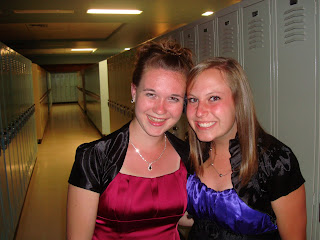 This is my corsage. Isn't it lovely? 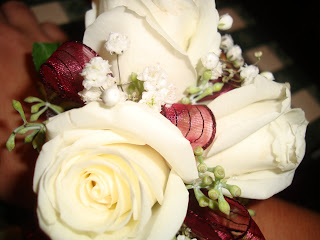 This is me and my date. We decided that his hair looks like Syndrome from 'The Incredibles' with blond hair. What do you think? 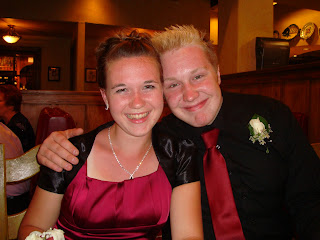 For our day date we went to Taylors ville Park and played Frisbee Golf on the Fresbee Golf Course(Yes I said course. People had kadies.) Jeanann through a frisbee under a fence and Dakota went to climb the fence and all the sudden there were tons of bees every where. I don't mean three or four bees. I mean like 50 bees. Dakota got stung three times on his neck and once on his butt, and he said in 4 other palces. Jeanann's final count was 12. Peanut got three on his head. And I got one on my ear. I have never been stung by a bee, until now. And you want to know something? IT HURTS!!!!!! I do not want to ever be stung by a bee ever again! Winnie the Pooh makes it look easy to run away from them but you know what it's not. they just keep following you around.
Then we went up Big Cottonwood canyon and we were going to go for a hike but we only went a little way and then there was this big mound of dirt that we climbed up and I slid down it. It was a lot steeper than I was anticipating but I thought it was fun. Chase on the other had did not enjoy it. Wimp.
We then went home and got ready. I told Jeanann that we wouldn't get to her house til about 6. Chase didn't get to my house until 6:30. He had a clothing mishap. He found out 5 minutes before he was suppsed to be at my house that his mom had given his black slacks to D.I. So they had to go get some slacks. We got to Jeanann's at about 6:45 and went to dinner.
We had planned on going to Chillies but when we got there there was an hour wait. So we went to Johnny Carinos instead. It was good.
We got to the dance at 8 it ended at 9. We stood in line for pictures for 45minutes.
After the dance we went to Dakota's house and did s'mores and watched The Princess Bride. Chase fell asleep durring the movie. After the movie we all went home.
Despite all the mishaps we had a ton of fun!!! We had a lot of laughs and we got some intresting stories out of it. So thanks to my group for all the fun and for the memories. Love you all!!!